skip to main | skip to sidebar

It is somewhat ironic that Kurosawa, a man called the most western of Japanese director's, had such an effect on the very genre that he himself was influenced by. 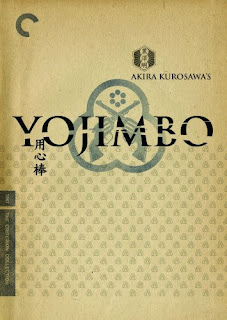 The Outrage and The Magnificent Seven, both re-makes of the Kurosawa films Rashomon and Seven Samurai respectively, are two examples of Kurosawa's influence on American westerns.

Yojimbo spawned the three-film "Man With No Name" series that launched Clint Eastwood to stardom. These films, directed by Sergio Leone, spawned the genre known as the spaghetti western.

Re-made twice into A Fistful of Dollars and the Bruce Willis film Land Man Standing, Yojimbo showed Japan just how Western Kurosawa could be.

The film even surpassed the popularity of Seven Samurai in the United States. The similarities to the American western and the light-humored, action-packed story make Yojimbo one of Kurosawa's most entertaining and accessible films.

As Kurosawa himself once pointed out, the story of Yojimbo is so simple it's a wonder nobody thought of it before.

The film stars Toshiro Mifune as Kuwabatake Sanjuro (30-something year-old Mulberry Field). Sanjuro, a wandering ronin (masterless samurai), strolls into what seems to be a deserted town. 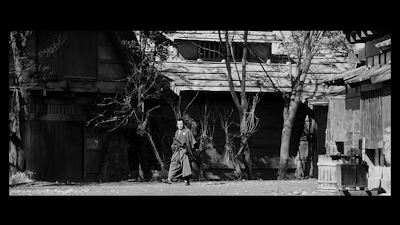 He soon learns that the town has been run down by two rival gangs. Sanjuro, seeking to both rid the town of the gangs and earn a profit at the same time, offers up his services as a yojimbo (bodyguard).

Sanjuro plays both sides of the town, thereby increasing both the money he can make and escalating the war between the two sides. 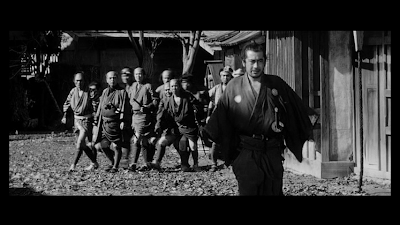 Sanjuro's luck finally runs out when, after he sets free the wife of a peasant man, he is caught by Unosuke (Tatsuya Nakadai in his first major role in a Kurosawa film), one of the gang bosses more worldly and intelligent sons. 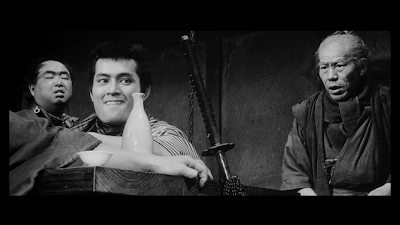 After almost being beaten to death, Sanjuro escapes and rehabilitates himself with the help of a restaurant owner and casket maker he befriended. 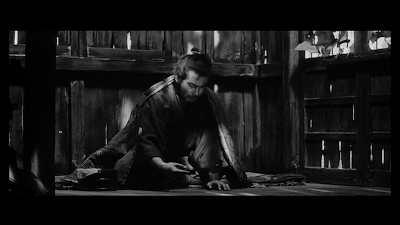 Fully recuperated, Sanjuro returns to the town to make one last stand against the one remaining gang. 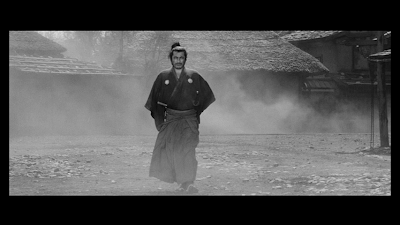 It is easy to see both how Kurosawa was influenced by American westerns and why this film would be an influence on many others.

Many of the standard western themes are present in Yojimbo. The film depicts a lone hero who must take the law into his own hands because both politics and the rule of law have failed in the dusty town. 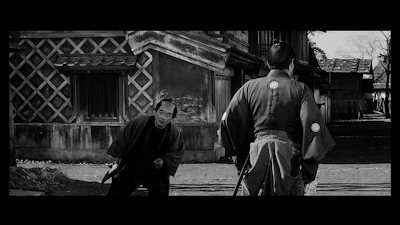 Yojimbo also presents another typical western genre code, the battle between tradition and encroaching modernization. Unosuke, brings back from his travels a revolver. The gun gives him an immense amount of power and authority. 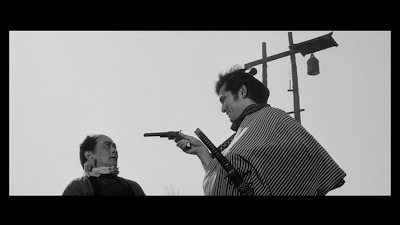 Unosuke is contrasted by Sanjuro, another traveled man who, though he has no past that we're aware of, seems to know a great deal about how the world works. 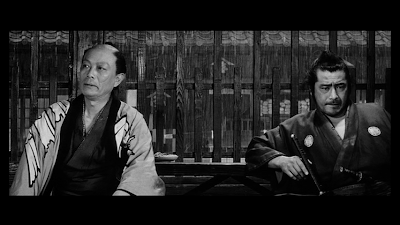 Sanjuro is suave and devil-may-care. He stays cool under pressure, cracks jokes about the towns corruption and kills without remorse. 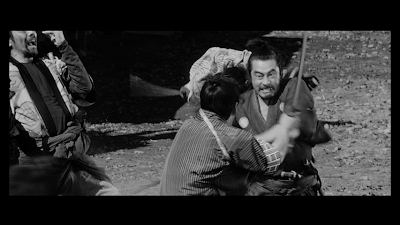 Sanjuro's moral code may be called into question at times due to his attitude towards killing and his financial motivation to keep the town fight going.

Despite this Sanjuro remains a lovable character throughout the film. If there was any doubt about this during the first half of the film, it quickly evaporates when Sanjuro takes it upon himself to free the peasant's wife even when he knows he could be caught at any moment. 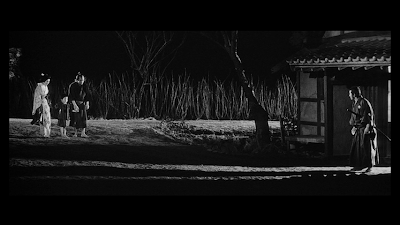 Much like your typical cowboy, roaming from town to town, Sanjuro has a bit of mystery behind him.

From the beginning we see that he lets fate decide what's next for him when he chooses follow the point of a stick he's thrown in the air. He doesn't want to get too attached either. He enjoys controlling a situation and hates appearing weak. 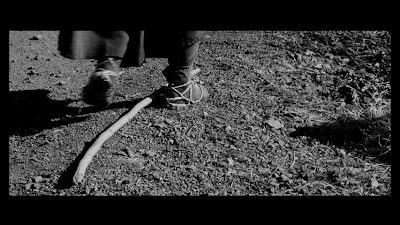 One way he attempts to avoid appearing weak is to crack jokes. Yojimbo is certainly Kurosawa's funniest film, and it is through the excellent writing and somewhat surprising comedic timing of Toshiro Mifune that the humorous atmosphere is achieved. 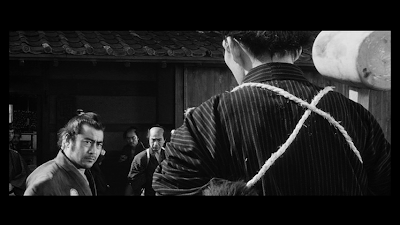 In the end he leaves the town the same way he came in. His work is done and it's time for him to move on to his next adventure. 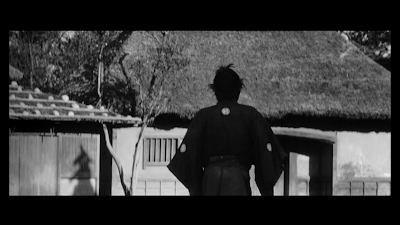 Kurosawa draws a line in the sand when it comes to the characterization in Yojimbo. Far from the ambiguity of his characters in previous films, Yojimbo presents us with good characters and bad characters. Plain and simple.

Yojimbo certainly wouldn't be the same without its masterful cinematography.

The film marked the second time that Kurosawa worked with the famous cinematographer Kazuo Miyagawa (the first time being Rashomon).

The image of a lone-ranger is captured brilliantly by Miyagawa, who often shoots Sanjuro from a distance to accentuate his isolation. The wide screen photography often helps to distinguish the two gangs in the frame. 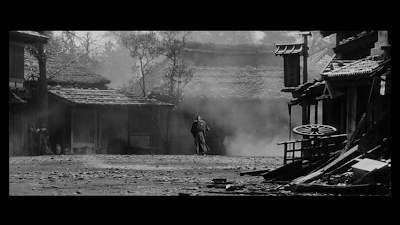 Once again no space is wasted in the frame, and no shot is without a purpose. Kurosawa's compositions are as strong as ever, with characters placed in exactly the right places to capture a moment. 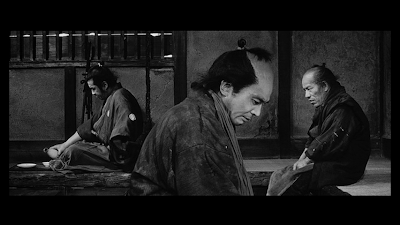 There is one element to the film that seems quite unlike any Kurosawa film before or after it, which is Masaru Sato's soundtrack.

Kurosawa wanted the music to sound voodoo-like, and it certainly does. The lively brass-oriented orchestra provides the film with an up-tempo, light feeling that helps keep the film rolling along.

There are more sensitive moments when the music will reflect the emotion of a scene, most notably when Sanjuro frees the peasant's wife, but other than that the main theme remains present through most of the film. 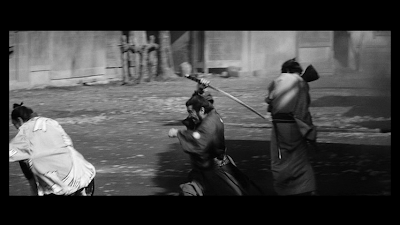 Yojimbo is one of Kurosawa's greatest films. Far more entertaining and more devoid of ideology than most of Kurosawa's other films, Yojimbo is an excellent film that proved Japan could produce a western of comparable (or even greater) quality than that of America.
Posted by Kevan Smoliak