skip to main | skip to sidebar

In 1977 director George Lucas revolutionized the motion picture industry when he made Star Wars. What most people don't know is that The Hidden Fortress was one of Lucas' primary inspirations for Star Wars. 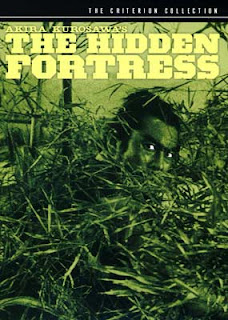 Although calling Star Wars a re-make of The Hidden Fortress would be an immense stretch, the two films do share common elements.

The plot of Star Wars is very loosely based on The Hidden Fortress. While the film is somewhat told from the perspective of the two lowliest characters (the two peasants and the two droids) and a general is attempting to bring a princess across enemy lines, the circumstances around those events are starkly different in both films.

While Lucas focuses more on the journey of a character of his own creation in Luke Skywalker, Kurosawa stays with the two peasants and sticks to the storyline surrounding the princess attempting to cross enemy lines.

It certainly helps that Lucas sets his movie in outer space while Kurosawa's film is set in 16th-century Japan.

Lucas does however use Kurosawa's trademark wipe transitions, replaces the samurai sword for the lightsaber and it is even rumored that he considered Toshiro Mifune, the general in Kurosawa's film, to play the role of Obi-Wan Kenobi in Star Wars.

Apart from its influence on Lucas, the film was important for Kurosawa as well. The Hidden Fortress was Kurosawa's first film in the new TohoScope (similar to CinemaScope) aspect ratio and the new 3-channel Toho Perspecta sound system.

Kurosawa had said that he enjoyed making more pure entertainment-type films after doing his serious pictures. Making The Hidden Fortress after The Lower Depths is a perfect example of this. 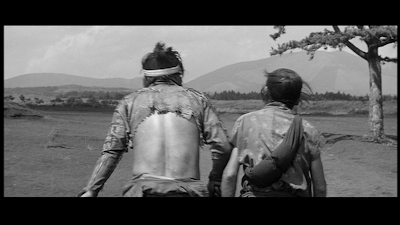 After escaping enslavement the two men find themselves near a river where they find a stick of gold embedded in some wood. While searching for more gold they come upon another man who begins to follow them. 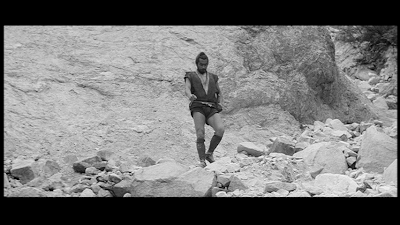 Matakishi and Tahei tell the man, who claims to be the great General Rokurota Makabe, of their plan to cross through enemy territory. The three men travel to the hidden fortress of the defeated Akuzuki clan. There they come across a young girl who we later learn is Princess Yuki, leader of the Akuzuki clan. 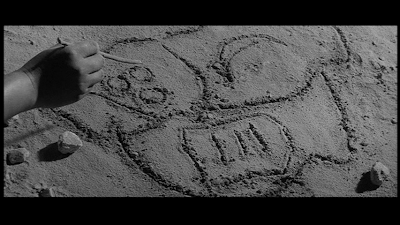 The four of them embark on the trail through enemy territory with 200 bars of gold in tow. Along the way the two peasants make numerous attempts to escape and Princess Yuki rescues a young girl who had been sold into slavery. 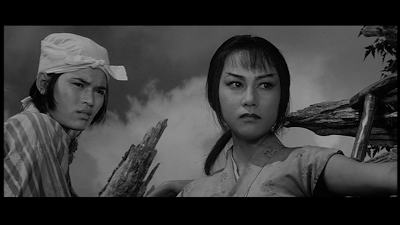 Eventually Matakishi and Tahei manage to escape when enemy forces begin to zero in on the princess and the general. 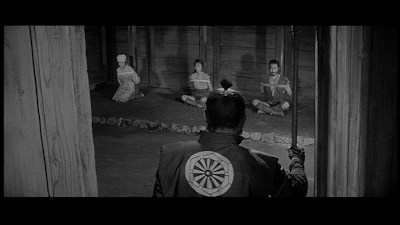 Just before their execution, the enemy general, a friend of General Rokurota, decides to set the princess and her companions free and defect to the Akuzuki clan.

Matakishi and Tahei, who were arrested after they were found with the gold-carrying horses that were let go just before the execution by the enemy general, are let out of prison by the princess. 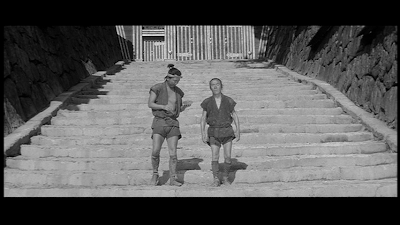 The princess, having taken over as leader of the Akuzuki clan, tells the men to share the piece of gold she has given them for all they've done, and the two men are set free.

Watching The Hidden Fortress, one would never guess that this was the first time that Kurosawa utilized the new CinemaScope (TohoScope) format. The director possesses the same control and awareness of the frame that any other director would have after dozens of pictures in the format.

Kurosawa had always been very aware of how his films were framed. His intricate staging and camera movements were executed with absolute precision. The new format would prove no different. 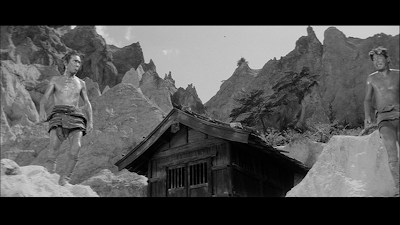 The new format was merely a refinement of Kurosawa's old technique. He still utilized his long lenses and long takes, but the acting seems much more free due to the wide screen aspect ratio.

This is evident even from the opening scene. Tahei and Matakishi, walking away from the camera, move from left to right far more freely than they could have with the old format. 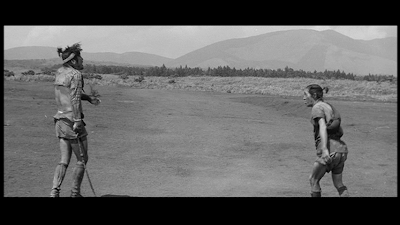 These subtle differences in filmmaking technique contribute to the films authenticity.

The feeling of realism is also felt as a result of the cameras range. Perhaps more than any Kurosawa film before it, the camera moves about in its surroundings to showcase the open world Kurosawa has created for the film.

Far removed from the often static and limited space of a film like The Lower Depths, The Hidden Fortress provides the audience with a completely authentic looking world. 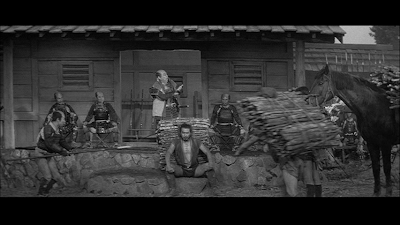 The Hidden Fortress also showcases Kurosawa's perfectionism. Kurosawa had said that fellow Japanese director Kenji Mizoguchi was the first to demand authentic props and costumes for his films, and that Kurosawa's own crew went about finding the genuine article purely to please the director.

All of this contributes to the feeling that one is actually looking through a window into 16th century feudal Japan. 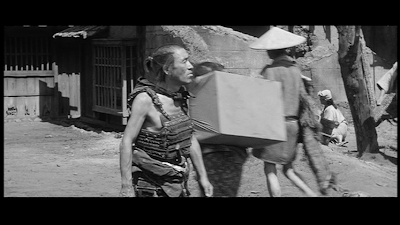 An important aspect of any film is its pacing. A slow film bores the audience, a fast film is difficult to follow. The key to film pacing is the editing. Kurosawa edited all of his movies himself. If his mastery of the camera is overshadowed by one other area of the filmmaking process, it is his mastery of the editing machine.

Perhaps the greatest example of his feel for pace is the scene in which, after being discovered by enemy soldiers, General Rokurota mounts a horse and pursues the men attempting to alert their camp. With remarkably fast editing and quick pans, Kurosawa creates an immense feeling of suspense. The scene continues through several cuts before it comes screeching to a halt when Rokurota enters the enemy camp and challenges a fellow general to a duel.

Typical of the chanbara, or sword-play film, the editing and action is slow. A complete reversal from the previous chase scene, Kurosawa creates an entirely different feeling of suspense. 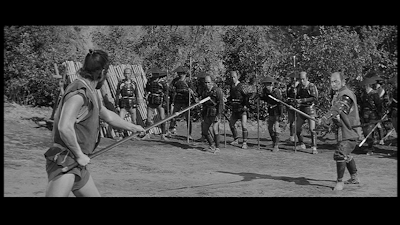 All of this is created not through composition or even acting, but through the mastery of editing.

Kurosawa utilizes one technique that hadn't been present in a film of his since the early 1940s, superimposition. The technique is used to great effect in The Hidden Fortress.

Struggling to keep her composure during difficult times, and realizing what lies before her in terms of rebuilding her clan, Princess Yuki looks out over her land and begins to cry. 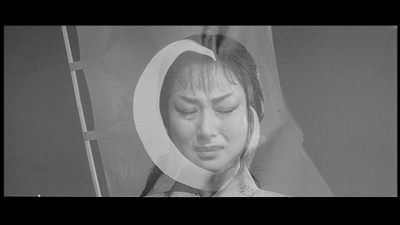 Superimposed over her face is the flag of her clan, with the crescent moon perfectly matched across her face. The scene is made all the more powerful by the epic score of long-time Kurosawa composer Masaru Sato.

This scene presents Princess Yuki at her most vulnerable. More than most female characters in Kurosawa films, Princess Yuki possesses quite a bit of emotional depth to her.

Even in the film one of the servants laments to General Rokurota that the princess possesses more qualities of a man than of a woman, and it is perhaps this reason that she is one of the more fully realized Kurosawa female leads. 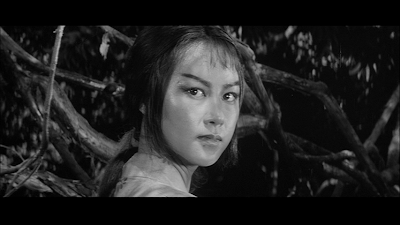 While her storyline in the end is overshadowed by the peasants tale, Princess Yuki's journey is more divergent from the pure entertainment feel of the film.

Her character has the opportunity, through her travels, to see the world as it is. She witnesses the joys and hardships of her fellow countrymen. She relishes the opportunity to take part in a traditional fire dance and wanders through a village soaking up all she can about the common man. 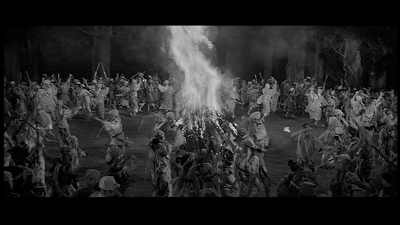 The greatest example of her bearing witness to the hardship of the commoners (especially the women), she stands with the air of royalty as she looks down on two women toiling away in a kitchen. While she doesn't say it, we know that she feels it is her duty to end this type of injustice, and that she is growing up before our very eyes. 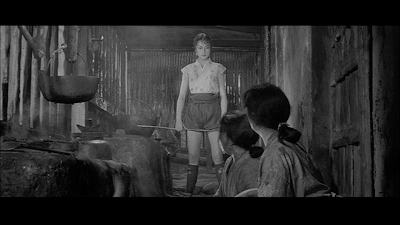 White the princess does not show any outward animosity towards the two peasants, General Rokurota certainly does. Often treating them like lowly troops in a two-man army, the general takes every opportunity to put the two men to work.

He has them cooking food, digging holes and carrying the majority of the load on their backs during their journey. While he does recognize that it was indeed the peasants idea to travel through enemy territory, even he and a fellow servant cannot acknowledge the genius of their plan. "Sometimes even moss can be smart," one man says.

It is often hard to blame the general for his attitude towards the two men. He is, after all, a military man used to giving orders and used to being obeyed. But on top of that the two peasants take every opportunity to either steal the gold for themselves or turn the princess and the general in to the enemy to claim a reward. 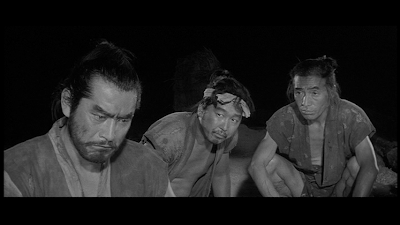 While the two peasants provide almost all the comic relief, making them sympathetic characters in the end, one wonders why they continually try to act to their own advantage. While they may be one step away from common thieves, they are still human beings, and any rational human being would realize that they need the help of their companions to get through their adventure alive. 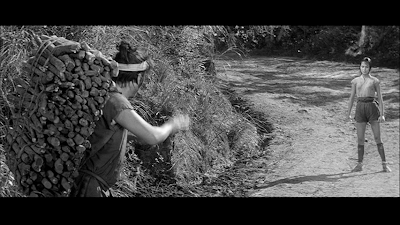 The two peasants do at time realize the error of their ways, but just as easily they fall back into their greedy selves. Even their friendship is called into question at times, despite the fact that they can clearly not function without one another. 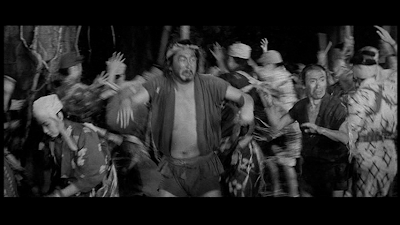 This most obvious example of their greed comes near the end of the film where, finally getting across enemy lines, the two promise to stay friends when they return to their village. All promises are negated when the gold-laden horses arrive. The two once again begin to quarrel over who will get how much gold.

Clearly these two have learned nothing from their journey.

It is only at the very end of the film that some semblance of goodness is seen from the characters.

The Hidden Fortress may be Kurosawa's most entertaining film. It is a first-rate action-adventure story that is as entertaining today as it must have been when it was released.

While the film is mainly pure entertainment, there are subtle themes of greater importance that are felt throughout the film. Without focusing too much on them, Kurosawa creates the perfect blend of entertainment and art. 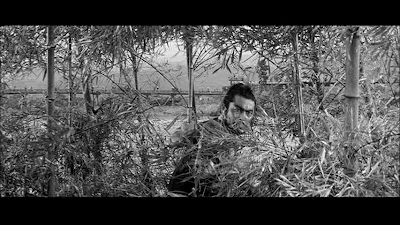 The back and forth between serious to entertaining films would continue for the next few films for Kurosawa. These films only further showcase the director's accessibility and love for the medium.
Posted by Kevan Smoliak